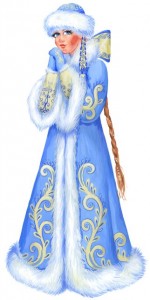 Once upon a time there lived an old man and a woman. They were happy together; the only thing that upset them was that they had no children.

The winter came with a lot of snow. All children were playing in the street. The old man looked out of the window and said to his wife:

“Old woman! Shall we go outside and make a little daughter for us out of the snow. We will call her the Snowmaiden.”

They made a snowball, made arms and legs, a neck and a head, eyes, nose and lips. And they could not believe when the Snowmaiden came to life – her eyes opened, her lips turned pink. Then she nodded her head, moved her arms and legs and came out of snow.

The old man and his wife were very happy. The Snowmaiden was getting prettier and prettier every day. She had long blond hair, big blue eyes, but her cheeks were very pale.

Snowmaiden was very good at helping her parents around the house. She liked to sing to amuse them during long winter evenings.

The spring came. The sun was getting brighter, the days were getting longer, green grass started to grow where the snow melted away. Everybody was happy, but the Snowmaiden became sad.

“What is wrong, my dear daughter?” asked her the old woman, “You are so sad”.

The last of the snow melted away, the flowers were everywhere, the birds arrived from hot countries. Only the Snowmaiden was getting more and more sad. She was hiding from the sun in the house.

Once a big black cloud brought hale stones. The Snowmaiden ran out to the garden to see them. And when the hale stones disappeared in the sun, she started to cry.

The summer came and all the girls went to a forest to a festival. They called the Snowmaiden:

“Snowmaiden, come with us to sing and dance”.

The Snowmaiden did not want to go, but her mother asked her and she went with the girls.

The girls went to the forest and started picking flowers, making daisy chains, singing and dancing. Only the Snowmaiden did not join them and was very sad and quiet.

In the evening the girls made a big pile of tree branches, lit a fire and started to jump over it. They were very happy and called the Snowmaiden to join them. So she jumped over the fire and melted so quick that only a little white cloud rose into the blue sky.