The 8th Festival of Russian Culture will run a week-long programme from the 19th to the 13th of February 2017 in various locations throughout the city of Dublin. The festival has become a traditional feature of vibrant Dublin cultural life.

The festival will encompass a selection of venues across the city, with activities certain to suit all cultural tastes in the Dublin City libraries, Trinity College, National Gallery of Ireland, Dublin City Gallery the Hugh Lane and other venues.

Children’s art competition for primary schools in the Dublin area will be running until the 20th of December. It is based on Pushkin’s fairy tale The Goldfish.

The Festival Committee has successfully secured renowned Irish artists to perform at the concert of Russian classical music in the Hugh Lane Gallery on Sunday the 19th of February at the official launch of the festival. Fionnuala Moynihan, Paul Roe, Deirdre Moynihan, Owen Lorigan, Sylvia O’Brien, Helene Hutchinson, Lance Coburn and Eoin Flood will perform at the concert along with Anna Kiselyova.

Hugh Lane Gallery will also host a guided tour with the Russian interpreting and a film and Russian Art.

Department of Russian and Slavonic Studies at Trinity College will be hosting Only one step: The Bolsheviks and Revolutionary Ireland: lecture on Centenary of Russian October revolution by Dr.John Borgonovo, a talk by the students on their experience in living and studying in Russia and a quiz for Transition Year students. A book auction will provide an opportunity to buy books in Russian or Russia related books and join the lecturers and the students of the Department at a cup of tea. Please see www.tcd.ie/Russian for details.

The National Concert Hall will have two concerts that include Russian classic Music. RTE National Symphony Orchestra and Nikolay Khozyainov (piano) will perform Rachmaninov’s Piano Concerto No.3 in D on Friday the 17th of February. On Friday the 24th of February Barry Douglas (piano) and RTE National Symphony Orchestra, conductor Alexander Vedernikov, will perform Tchaikovsky’s The Tempest Fantasy Overture, Piano Concert No.3 in E flat, Romeo and Juliet Fantasy Overture, Piano Concerto No. 1 in B flat minor. Alexander Vedernikov and Barry Douglas will have In Conversation session at 7.00 pm. Tickets from €15 at www.nch.ie

A few events are planned for the Dublin City libraries. The Central library will host a master class with Anna Kiselyova on 235th anniversary of an Irish composer John Field, who settled in Russia and gave piano lessons to many famous Russian composers.

Pearse Street Library will be hosting Russian with Fun and sing-along session for children with Svetlana Maximova.

An evening In Original and in the Russian Translation  with poet Dermot O’Brian will present a unique opportunity to experience Russian and Irish poetry in the original language and in Russian followed by a talk on challenges of the literary translation. This event will take place in Terenure Library.

The National Gallery of Ireland will host a lecture Wanda Smolin on Russian Avant Guarde and the influence of traditional Russian folklore, woodcuts and icon painting on the work of many artists of the time. Please see www.ngi.ie for details.

These and many more events will be organised during the festival week. The programme will be available shortly.

With the support of the Royal Irish Academy of Music a concert of young and emerging pianists, the students of the academy, will take place in the Hugh Lane Gallery on Saturday the 25th of February. Please see www.riam.ie

The festival will traditionally conclude with the Family Day, held on Sunday the 26th of February in the National Show Centre, Swords. A renowned Moroshka (Cloudberries) Dance Theatre from St. Petersburg will present a colourful performance along with Trio Vremena (The Epochs) and duo Maxim Pavlov and Gregory Seredin from Moscow. The local dancers, singers and traditional Minstrels will also show their talent. There will be food and crafts market, children’s entertainment and much more. A full programme is available at www.russianfestial.ie

The Festival of Russian Culture is organised by the Russian community in Ireland and is supported by Dublin City Council, the Russian Embassy, Moscow City and St. Petersburg City Government, Moscow Department of Culture, National Gallery of Ireland, Royal Irish Academy of Music and Department of Russian and Slavonic Studies in Trinity College.

Moroshka to Welcome Guests of Russian Maslenitsa in Dublin

26 February 2017, Saint Petersburg will present a show of the Moroshka Theatre at the final concert of the 8thMaslenitsa Russian Culture Festival in Dublin, Ireland. 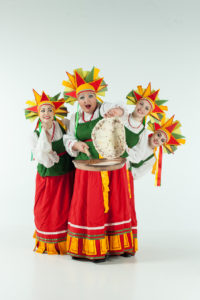 The event is held for the purpose of preserving the spiritual commonality and cultural heritage of Russia, maintain the interest of both compatriots residing in Ireland and locals in the Russian music and literature, history and traditions.

The Committee for External Relations of Saint Petersburg sends a music and dance company — Moroshka Russian Theatre — to participate in a concert as part of the Family Day.

The musicians and ballet dancers will present to the audience their spots on Saint Petersburg, Russian folk songs and dances, acrobatic etudes and many other things.

The concert will be performed at the National Show Centre, Swords (address: ). 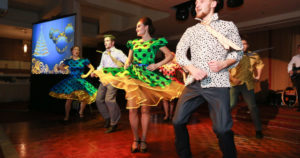 The Moroshka Theatre is unique due to its unconventional approach to the repertoire. Each spot is based on folk tunes from different regions of Russia decorated with modern orchestrations and vocal adaptations. The Moroshka Theatre is a show performed in a special and light manner so typical of Saint Petersburg. 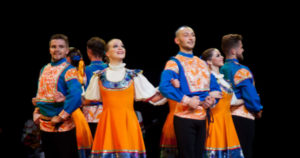 In addition to the concert programme, the guests will be offered informational and display materials on Saint Petersburg in Russian and English. A souvenir and craftwork fair will also be open.